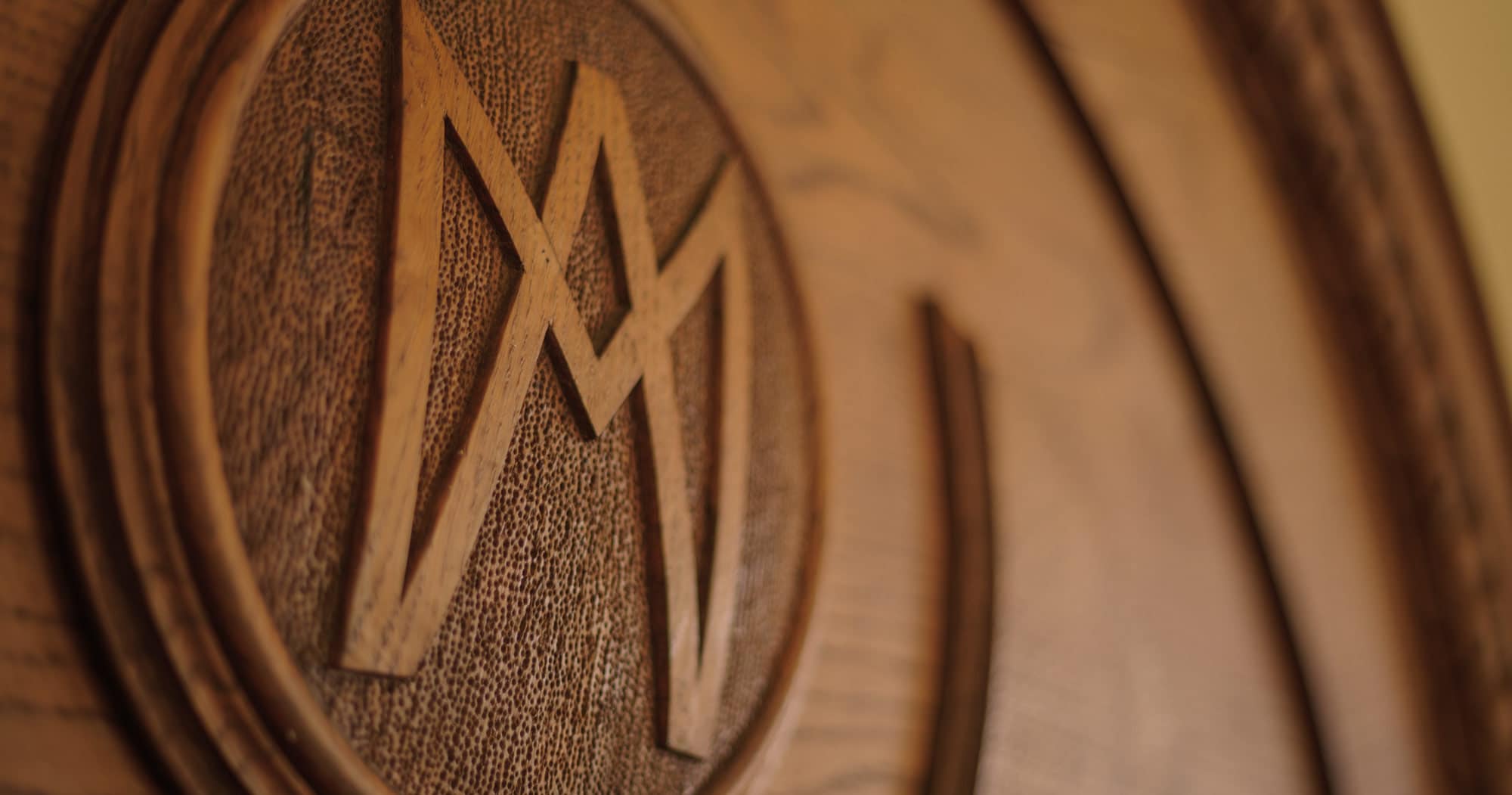 On 9 October 1300, Seyfrid (Žiga) and Elizabeta Gallenberška (of Mekinje) established the first monastery of St. Clare in Carniola on their land in Mekinje. In addition to the premises at Mekinje, they also donated to the monastery their property, which included 13 farms, 4 cheese dairies, the right to supply timber, some meadows, orchards and streams. The official name of the monastery was as follows: Monastery of St. Mary (the assumpted) of the Order of St. Clare in Mekinje in Carniola. The spiritual leadership of the Mekinje Poor Clares was run by Minorite Friars of St. Francis, first the Order of Friars Minor from Ljubljana, and from 1629 onward, the Franciscans from Kamnik. The Monastery of Poor Clares in Mekinje stood, unlike most of the other monasteries, outside the town, and was therefore considered a “rural” monastery. The Mekinje Monastery belonged to the order of Poor Clares – nuns, who could also possess real estate, something which obstructed their monastic life. Initially, the monastery was home to thirteen nuns, while later their number varied. It was mostly the daughters of prominent Carniolan nobles and bourgeois families who joined the monastery. Some nuns were also from Styria, Gorizia and Carinthia. According to their position, the Mekinje nuns were prelates and were allowed to attend meetings of the Carniolan provincial council through their representative (documented proof from 1577 onwards exists).

Until the 16th century, despite numerous donations during the 14th and 15th centuries, the monastery’s wealth was slightly smaller in comparison to the assets of other monasteries. The monastery had the most property in the eastern part of Upper Carniola, from Zagorje to Velesovo. The Mekinje Monastery also had the right to obtain timber from the Bistriški forest. This right is mentioned in the document dated 15 April 1516, which contained a settlement after long-standing disputes between the town of Kamnik and the monastery. On August 29, 1338, Archduke Albert III. granted the monastery the right to a lower or patrimonial jurisdiction over serfs belonging to Mekinje feudal land owners. This privilege and freedoms were later repeatedly confirmed by Austrian rulers.

Few documents exist that testify to the Mekinje serfs’ participation in peasant uprisings. It is known, however, that serfs at the monastery enjoyed a considerably better life than those working for other land owners.

The Turks plundered the monastery only once: in early June, 1471. It was then that one of the three groups of the Turkish army made its way from Ljubljana to Kamnik, and from there to Mekinje, where they looted the monastery and then continued across the Tuhinj Valley to Celje. According to some data, the Turks captured all the nuns of Mekinje. The northern gate of the Kamnik’s anti-Turk wall was named after these nuns. The wall led from the town to the town’s suburb of Graben and further towards Mekinje, “Frauentor” = the nun door.

As soon as the dispute over the hereditary attorney’s office over the monastery was resolved in 1681, which unambiguously guaranteed the Gallenbergs the right to take legal advice over the hereditary of Mekinje Monastery and the right to pledge the newly elected Mekinje Abbey, the brothers Jurij Žiga Gallenberg and Janez Friderik Gallenberg undertook the thorough renovations of the Mekinje Monastery. At that time, the monastery was already in a bad state, since it had not been renovated for a long time. The inscription on a black polished marble over the monastery’s former main entrance and on the wall above the gate of the former Poor Clares’ monastic community tells us in Latin that at that time the monastery had already suffered from decay due to age and that it had been restored from its foundations up. Valvasor’s painting of the monastery before its reconstruction shows that it was mostly wooden before the renovation, and the roof was covered with shingles. The expenses of the monastery’s renovation were covered in part by the Gallenberg brothers, and partly by the province of Kranj. Valvasor reports that the reconstruction was completed in 1686. He also wrote that the restored Mekinje Monastery could rightly be called the “most beautiful monastery in Carniola”.

From the monastery’s founding onward, the Gallenbergs continued to have the right to bury members of their relatives in the Mekinje Monastery’s (today the parish) church. This tomb, together with their remains, has survived to this day, but it is not accessible to tourists.

The time of the reforms of the enlightened rulers of the monasteries and contemplative orders was not favourable, as they did not contribute to the state’s wealth according to rationalist opinion. Thus, on 12 January 1782, the Austrian Emperor Joseph II. issued a decree on the abolition of certain monasteries, including the one at Mekinje. The Poor Clares left Mekinje on 1 July 1782.

In 1787, five years after the dissolution of the Mekinje Monastery and the persecution of the clergy in the ground floor of the ravaged monastery of the Dominican monks in Veles, the nationalized monastery estate Mekinje became an independent district district. In the same year, Mekinje was founded a local one, which was elevated to an independent parish in 1875.

Since 1799, the monastery served as a prison for French soldiers, with whom Austria was occasionally in war during those years. At the same time, the Mekinje Monastery was also used as a hospital. After 1800, the number of patients increased greatly, and the two provincial authorities sent two Franciscan monks to act as confessors. In the time of the Illyrian provinces, the French military occupied the Mekinje Monastery. After the Austrian “restauration”, in 1814, it was replaced by the Austrian army, which occupied the building for a number of decades to come.

In 1830, they sold the nationalised “cameral Mekinje nobility” together with the monastery to Baron Apfalter from Križ. The absolutist state had lost interest in supporting the land owners. Soon, even the new “secular” owners, or rather their heirs, found that there was no benefit in keeping the empty and decaying monastic building, and that it would be more useful to sell it.

On 15October 1901, the head of the Ljubljana Ursulines m. Theresa Heidrich received an offer to buy the former Clares’ monastery. The negotiations lasted throughout the year, as some other interested parties were already bidding to purchase the building, including the Clares from Brixen (South Tyrol) and the great master of the German Knights Order Archduke Evgen, who visited the monastery building as early as 15 May 1896, where he intended to set up a hospital, yet the building was not to his liking.

The purchase contract between Baron Apfaltrern and the Ljubljana Ursulines was signed on 15October 1902. The Ursulines paid 25,000 Austro-Hungarian crowns for the monastery. At the same time, the Ursulines of Ljubljana also endeavoured to open a 5-grade People’s School for Girls. Permission for the school was awarded on 27 December 1902. At first, the Ursulines taught only the fourth and later the fifth grade, which meant that their lessons were initially only extracurricular activities of the existing state elementary education programme in the Kamnik area.

The purchase price for the monastery was paid on 19 May 1903. On 8 June that same year, the head of the Ljubljana monastery m. Theresa Heidrich, together with the monastery’s spiritual teacher Bulovec and sisters m. Viktoria and m. Ludovika, made a thorough inspection of the monastery’s grounds. The first impressions were not the best, but despite her second visit to Mekinje on 15September 1903, she managed to finish all renovation works and prepared the rooms for classes. The monastery was in a very bad condition, so the Ursulines had to invest a considerable amount of funds in the reconstruction. All works were led by the Franciscan p. Hieronim Knoblehar.

During the World War I, a part of the monastery served as a military hospital for the Austro-Hungarian soldiers, and the Second World War meant a large cut in commune life of the Ursulines, comparable only to the dissolution of the clergy 140 years earlier.

The first victim of the war or in the preparations for it was the closing of the Ursulines’ school as early as 1 April 1941. All the while, during the brief wartime operations of April 1941, the Ursuline Sisters, like the surrounding inhabitants, were living in fear that German bombers would bomb the nearby streets. The German army in Kamnik, together with clerics, teachers and educators, the Ursulines became the first victims of the occupation in Kamnik, for German soldiers had expelled them from the monastery during the second week of the occupation.

In June 1945, after a joint effort by those individuals sympathetic to the Ursulines from Mekinje and Kamnik, the nuns returned from exile. They could return only after they promised the new authorities that they would cook for the emigrants who would be returning to their homeland and stay temporarily at the Mekinje Monastery. A large part of the Ursuline monastery was not allowed to be used by the nuns, limiting them to only few rooms on the first floor of the monastery. In 1945, the Communist government forbade the school to pursue school activities for ideological reasons. Nevertheless, for many decades, the Ursulines were carrying out private instruction in various school subjects, especially mathematics and foreign languages.

In the first years after the war, the then head of the monastery played an important role in the return of the Ursulines to Mekinje and the adaptation of the monastic community to the new social order, namely the Mekinje local, m. Magdalena Plevel. In order to save the monastery from abolition, she proposed that a similar state economy be established in Mekinje, as it was in Repnje on the property of school sisters. Thus, in 1949, the state economy of Mekinje was established, and the Ursulines were employed as national workers. They also received state salaries and enjoyed welfare protection. With this, the Ursulines were rescued from their social distress. Because of their jobs and according to the decision by the provincial head, the nuns had to wear civilian clothes. In 1959, following the decision of the Kamnik municipal committee, the economy in Mekinje was abolished and a large part of the monastery was nationalised. The nationalised part of the monastery served various purposes: apprenticeships of various disciplines (hairdressing, carpentry, etc.), a correctional facility for minors, private housing, a folk art workshop, a radio club and towel storage. From 1971 to 2000, a part of the monastery was a warehouse where books of the National and University Library in Ljubljana were stored.

As early as July 1945, about 1,000 internees from German camps came to Mekinje and brought typhus with them. From May 1946 to December 1952, the monastery was a base for the repatriation of war-displaced persons. In July 1949, the women of Markos’ Greek Partisans with children settled in the monastery for some time.